During the year 2018, Presentation Sisters celebrated the three hundredth anniversary of the birth of their foundress, Nano Nagle. Many

events were held throughout the world to honour and commemorate this wonderful woman who used her own resources to provide education for the poor in Ireland, at a time when this was prohibited by the penal laws. To ensure the continuance of this work she went on to found the Presentation Sisters Congregation on Christmas Eve 1775. 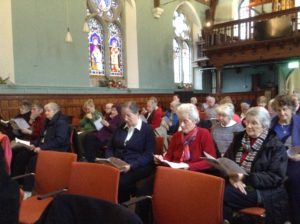 On Christmas Eve 2018, Presentation Sisters, South West Province gathered at Nano Nagle Place, Cork       (the place where it all began), to mark the closing of the Tercentenary Year of the birth of Nano Nagle.

The Closing Ritual called us to reflect on the life and work of Nano Nagle, the people in whose footsteps we 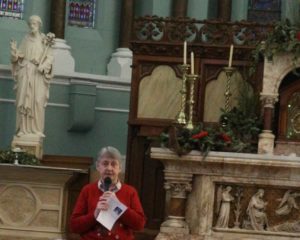 follow and the spread of the congregation throughout the world.

We also took the opportunity to celebrate the anniversary of the founding of the Presentation Congregation on Christmas Eve 1775.

We remembered with gratitude the gift that Nano was and we gave thanks for the people who followed in her footsteps, particularly the three sisters, Mary Fouhy, Elizabeth Burke and Mary Ann Collins, who responded to the invitation of Nano and joined her fledgling congregation on Christmas Eve 1775.

The ritual concluded with Presentation Hospitality.